Thanks for visiting my blog. It's rather flattering to have someone read your minds meanderings. I hope it's entertaining and sometimes educational. 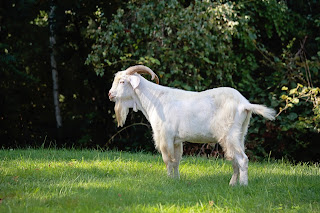 Today I offered to help a friend who had seen a loose and lost Goat in Millbury. She had done the research and knew how long it had been out and who it belonged to and got permission from the landowners to try and catch him.

I hooked up the trailer and loaded my goats and some grain for  bait about 10:30 and on the road.  I  met Erin at a local feed store and she rode with me to the peoples house.   I backed the trailer into their  driveway and Erin got out and told me he was up on their back porch.  The porch had 2 entrances and he was skittish so just about as soon as I unloaded my goats who were quite content to just eat grass on the lawn, he bolted into the woods. I took Kip out and we too my goats down into the woods after him.  He was right on a rock on the edge of a swampy pond.  There was a lot of thick underbrush and I had never asked Kip to work in that stuff. We tried to surround him but he spooked and ran to the other side of the pond.  Erin went around to cut him off and Kip and I approached head on.  He was on a rock basically in the pond. Kip and I held him there while Erin got closer. She grabbed at him and got him but could not hold him. so he ran and I sent Kip for him.  The goat went around the pond again but Kip caught him and turned him back to us. He went back to the rock.

At this point we needed a new plan.  Neither one of us thought to bring rope or halters, but I had some dog leashes in the car and we went and got them all.   We surrounded him again and this time Erin got a leash around his neck and snubbed him to a tree.  Our plan then was to get another rope on him and tie him from tree to tree as we inched towards the yard which was uphill thru woods and across a deep rocky stream bed.

It's hot out and we are sweating our brains out and the buck keeps jumping and running and trying to kill himself.  He was not tame in the least.  2 hrs into this, Erin says how about if I call a vet friend and get them to come and tranquilize him.  I agree and I have the goat snubbed up against a tree very close to a rocky dropoff. If he keeps jumping then he is going to hang himself.  So she goes up to the house to try and get a phone connection.  20 min later the goat and I are getting tired and bored so I attempt to move him myself. He promptly panics and falls over the edge and is hanging himself.  I get him loose and he gets on his feet huffing and puffing.  I try pulling and he comes with me slowly.  Ok , I get it , he is so tired now that I can basically drag him across the stream bed and up the hill. I fall once and he freaks out but I have a hold of him and he WILL NOT GET AWAY.   I am calling for Erin but she is not coming so I keep dragging him.  I get him to the trailer and I sit down to rest. He is at the end of the leash and we are both panting.

Erin comes out of the house at that point and just steps behind him and I drag him into the trailer. SUCCESS!!  Erin was very concerned the homeowners would kick us out if we hurt him.  Well he was not hurt much but they would not have liked the way I had to handle him.

ok loaded and AC on and puppy walked and dogs watered and livestock all watered.  Done  and onto the next adventure. We took him 5miles away to his home.  They were very surprised we caught him. Frankly so am I . We were ready to give up believe me.  Not sure why we continued.  Anyway the farmer gave be a little black doe for picking up his buck.  She is out in the yard now.

BTW    I just took a shower and I can still smell smelly old buck on me.

Posted by Diane Menard at 8:47 PM No comments:

So since he has been home I have been fighting the fact that he was allowed to pee and poop anywhere he liked. (in the house).   House training is constant.  You can't leave him alone for  a second or he is either peeing or into something.  He is the most oral puppy I have ever had.
He was never corrected for anything, so I have to be the bad guy. He wants to bite me and in another week or 2 that is going to hurt so I am nipping that in the bud.  He knows nothing and he is a bright little guy.  He is not crate trained, had never had a collar and leash on and I am having trouble with crate training.  Last night he screamed for 2 hrs so I kept trying to change locations of the crate. Nothing worked. Finally he got so tired he conked out when I moved the crate next to me at 1;30.  He is tired this am.  (so am I)

I gave him a mouthful of raw beef and he immediately violently threw it up.  Ok back to kibble. Might try a chicken neck soon though.

I have used the clicker on him and I am teaching him to sit(he seem to get that). Today we worked on down. I can't get him down with a cookie so I just stepped on the leash and waited. I feed him in the crate but now he is panicking when i put him in it and close the door. I tried to put him next to Kip but that didnt' make any difference.  Not sure how to handle this.

He is very lovable, but seems very needy. He does not want to be alone AT ALL.
Posted by Diane Menard at 11:47 AM 1 comment:

I flew out to Idaho to pick up my new puppy.  I left at 5am  last Tues to drive to Logan and I had reserved a spot in a offsite parking lot for my car.  I did not know how fast they would get me to the airport so I was a little earlier than I needed to be and everybody kept warning me about security.  Well I got to Boston about 6:15  and the whisked me over to the airport and I was thru security in approximately 1 minute(no lines whatsover).  So now I had to wait until the plane left at 9:20.  It flew to Chicago and I had a 1 hr layover and then we flew to Phoenix where we had to stay on the plane before we took off for Boise arriving there at 6pm
Frances picked me up right away and we went to dinner.  And got reaquainted. She is Dare's breeder and I was there 10 yrs ago to pick up Dare.   When we got to the farm the puppies were outside in a small xpen and the other dogs were out loose.  The first thing I saw was "the ears"  He was really cute and the only one with prick ears.  He was tiny compared to the 2 girl pups. very active  and vocal.  Then I met Que(the mom and Dare;s sister)She is the spitting image of Dare.  Same eyes, same intensity, same type of coat and same graying pattern.  She was a love.  I would take her home in a minute.
I found  my room and went to bed early. Slept pretty well too.  The next day I realized the stains on the floor were a lot of dog shit that hadnt' really gotten cleaned up well. Ok so I have to live in a dog kennel for a couple of day.  In Frances's defence, she is 73, alone, running a farm,and caring for her 50 yr old severely handicapped son.  You would think her family (of which there are many local)would come and help her out a bit more.
We spent the next day talking to Stephanie who was taking a girl pup home to her husband Nate who was the guy Frances was allowing to trial Que.  The girl pups beat up on my pup because they had at least 1 lb on him and looked like more substantial bone too. Hopefully he will catch up to them. She was feeding him only 2x day and I think he was hungry. When he got here he would poop and whip around to eat it. He is doing better now.

The trip home was okay. Frances took me to the airport for 1 pm and we said good bye. . The flight did not leave until 3 and it was delayed till 3:30. More time for puppy to stay in the sherpa bag. We flew to Denver and the plane was packed.  Layover was over an hr and I took him out immediately in the airport and used a puppy pad and he very conveniently used it and actually hit it. YAY.  Back on the plane for a 4 + hr flight to Boston. We had storms that night so to avoid them the pilot took us to Canada and back down to Boston. I dont'think it took any longer. I think we landed around 12;30and I went out and tried to get him to pee and poop.  I got the pee and not the poo.  The shuttle picked us up and we got the car and I tried again to walk him but no go. Got in the car and the road was all detours so it was a little hard to get back onto the turnpike and of course about 5 min into the ride he pooped in the crate. I had to pullover and bag it and get back on the road.  I got home around 2:30 and in bed at 3. I took until 4 to fall asleep and he woke me up at 6:30.  So I was a zombie all day even though I tried to sleep off and on all day,
Posted by Diane Menard at 11:36 AM No comments: